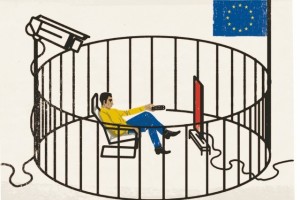 On June 26, an ISIL-supporting gunman trained in Libya carried out a massacre on a Tunisian beach. Over the course of 47 minutes, Seifeddine Rezgui shot and killed 38 holidaymakers, including 30 British tourists. It was the worst terrorist attack targeting British civilians since the 7/7 bombings on London’s transport system a decade ago.

As with the January assault on the offices of the magazine Charlie Hebdo in Paris, the justified outrage at the Tunisia massacre is being used by politicians to legitimise the erosion of liberties.

Following the attack, British prime minister David Cameron declared: “They are attacking our way of life and what we stand for, and so we have to stand united with those that share our values.”

A week later, on the anniversary of 7/7, he again highlighted the need to promote “the shared values of tolerance, love and respect that make Britain so great”. Yet Mr Cameron’s government has undermined those values far more effectively than the terrorists.

By themselves, ISIL and its supporters are unable to transform Europe’s way of life. But they are aided in their campaign against democracy by unwitting political leaders. The terrorists’ work is done for them when governments strip away democratic rights in the name of fighting terrorism. A rule of thumb in Europe today is that the more fervently a politician speaks of defending liberal values, the greater a threat they are to those very values.

Mr Cameron is a case in point. Under his government’s counter-terrorism strategy, public bodies from nursery schools to medical staff are obliged to participate in the “Prevent” surveillance programme to identify would-be extremists, even among young children.

Schools, universities and doctors must monitor students and patients for supposed signs of radicalised behaviour. These are defined so broadly that many mainstream Muslim beliefs count as suspicious.

Never in peacetime Britain has national security surveillance been so deeply embedded in the normal functioning of public life. Meanwhile, new legislation proposes censorship of broadcasters, the banning of Muslim political groups, even if they have no record of violence, and new powers to close down mosques and Muslim charities.

Muslim children are also a target in France. Special measures introduced after the Charlie Hebdo attack require schools to report pupils for comments that are said to constitute an “apology” for terrorism. Hundreds of such incidents were passed to the police in January. France’s education minister, Najat Vallaud-Belkacem, told the National Assembly: “Even in schools where no incidents took place, too much questioning came from pupils,” labelling as suspicious even the act of discussion.

On January 11, thousands marched through Paris to declare “Je Suis Charlie” and to defend freedom of expression. Yet at the same time, Muslims had their freedom of expression restricted. Over a hundred were charged with expressing opinions considered too accepting of terrorism. In Nice, an 8-year-old Muslim boy was asked by his teacher to adopt the slogan “Je Suis Charlie”, to which he said he objected to the magazine’s cartoons. He was summoned by the police and accused of condoning terrorism.

According to its political leaders, Europe today faces a fundamental threat to its identity. Muslim terrorists, many of them European citizens, threaten violence against fellow nationals. If this danger is unchecked, say mainstream politicians, Europeans will become uneasy and the continent will be riven by social strife. Better therefore to take a tough stance now before the problem gets out of hand.

But the threat to European democracy does not come from ISIL; it comes from how Europe reacts to ISIL. And the reaction to ISIL comes from the top down. Public opinion reflects rather than drives government policy on national security.

For all the rhetoric, terrorism is actually low down the list of concerns among Europe’s elites. A greater worry is how to maintain cohesion in the face of the social frustrations generated by increasing poverty. And for maintaining social stability, terror is as much a solution as a problem.

Defending so-called national values makes for a useful distraction from questions of economic inequality. Support for authoritarian surveillance and censorship is more easily won if presented as necessary to protect the nation from extremist violence.

Unfortunately, such violence is likely to continue as European leaders consider deeper military involvement in the Middle East, which will increase the likelihood of terrorist attacks within Europe. The disastrous consequences of Britain and France’s last major “intervention” in the Middle East – the attack on Libya – are now clear. Indeed, it is likely the recent attack in Tunisia was in part a by-product of the devastation wrought on Libyan society by western air strikes.

This all has serious consequences for European democracy. The politics of fear produces a two-tier Europe. With millions of citizens treated as threats from birth because of their ethnic or religious background. European liberalism is then reduced to a matter of privilege not principle, a “way of life” whose benefits can be allocated and withdrawn at will, according to racial or religious identity.

Democracy becomes a hollow shell, no more than a set of empty slogans to be chanted patriotically, while minorities are subjected to loyalty tests and mass suspicion.

In Britain, the ugliness of the current political climate was illustrated recently by a column in the leading tabloid newspaper The Sun. Discussing the tragic scenes off the coast of Italy in April in which hundreds drowned trying to enter Europe, columnist Katie Hopkins wrote “these migrants are like cockroaches”. The use of such dehumanising language is not an isolated example but reflects a general mood. The economics of austerity needs the politics of racism; if black- and brown-skinned enemies did not exist, they would have to be invented.

Moreover, the surveillance and censorship programmes legitimised through the fear of ISIL are easily recycled for other uses should the need arise.

As European elites struggle to defend the existing system in the face of growing social antagonism, the balance between consent and coercion is likely to shift. Surveillance structures initially deployed against European Muslims will find new uses in targeting political activists and the disaffected poor. In Britain, even as genteel an organisation as Amnesty International has been the target of government spying.

Fascism does not necessarily appear wearing jackboots. Or even in the guise of Marine Le Pen’s Front National, France’s far-Right political party now poised for mainstream success. Today, it eases itself into everyday life through a gradual but determined build-up in which the exceptional becomes normal. It begins with checkpoints at train stations, armoured vehicles at airports or the co-opting of school teachers into serving as the eyes and ears of an out-of-control surveillance system. Then, one day, freedom has vanished.

But that outcome is not inevitable. Avoiding the loss of Europe’s liberal values tomorrow means defending the civil rights of European Muslims today.

A version of this article first appeared in The National.