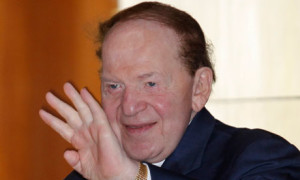 By donating $10m to the pro-Newt Gingrich Super Pac campaign, casino magnate Sheldon Adelson, one of the richest men in the US, and his physician wife, Dr Miriam Adelson, have kept Gingrich in the Republican primary race, and given him the resources to win in South Carolina and, potentially, in Florida, without having to build a large donor base.

The power of corporate money in American politics is nothing new. But the rules set by the US supreme court in its Citizens United decision – that money is speech and corporations are people protected by the first amendment – have undone the limits set by Congress in the 1970s, allowing, in this case, one family to transform the Republican primary race.

Of course, like all private funding of politics, there is no way of knowing with certainty what the Adelsons expect to achieve with their money. And the mainstream US media has been coy about referring to the Adelsons’ political views. The New York Times story on the latest $5m donation to the Gingrich-supporting Super Pac merely described Sheldon Adelson as “a longtime Gingrich friend and a patron”.

This ignored the fact that the Adelsons use their wealth to fund rightwing groups in Israel and anti-Muslim campaigns within the US, causes that are also strongly supported by Gingrich. In Israel, Sheldon Adelson has been accused of using his newspaper Israel Hayom to promote support for his friend, Prime Minister Binyamin Netanyahu, who is also a political ally of Gingrich. In addition, Adelson is a financial backer of the One Jerusalem group, which opposes peace negotiations that would lead to parts of Jerusalem coming under Palestinian sovereignty. The couple’s Adelson Family Foundation donated $4.5m to the founding of the Adelson Institute for Strategic Studies in Jerusalem, headed by Likud party former minister Natan Sharansky (pdf).

Adelson has also funded the leading pro-Israel lobby group, the American Israel Public Affairs Committee (Aipac). Aipac is known for its strong and effective advocacy of Israel’s interests in Washington, but four years ago, Adelson reportedly complained to its director that it was too supportive of the Palestinians. He has called the two-state solution a “stepping stone for the destruction of Israel and the Jewish people”. He also reportedly supports the Clarion Fund, which produces scare-mongering films advancing the conspiracy theory that Muslims seek to impose sharia law in America.

Gingrich shares the same political agenda. On 9 December, in an interview with the Jewish Channel, Gingrich stated that the Palestinians are an “invented” people. Asked about the comments while in Israel, Adelson defended Gingrich. In an address to the Republican Jewish Committee last June, Gingrich called for the US to end negotiations with the Palestinian Authority and for the closure of UN camps that house 1.4 million Palestinian refugees. He has also said there is no reason for Israelis to slow down settlement activity and give up on “maximizing their bargaining position”. He has enthusiastically perpetuated the narrative that Obama has been a poor friend to Israel, despite Obama’s repeated statements and actions to the contrary.

Gingrich is “realistic” about the threat of Islamic fundamentalism, according to Adelson. He has endorsed the conspiracy theory that Muslim organisations are using a strategy of “stealth jihad” to infiltrate sharia law into US institutions. Speaking to the American Enterprise Institute in July 2010, Gingrich said: “I believe sharia is a mortal threat to the survival of freedom in the United States and in the world as we know it.” He favours a federal law to ban sharia from US courts and has said he would require American Muslims to make a loyalty declaration before serving in his administration. With his wife Callista, he produced and narrated a 2010 film on the threat of radical Islam, entitled America at Risk: The War With No Name. Bernard Lewis, who coined the phrase “clash of civilisations”, appears in the film, saying: “This war will go on until the entire world either embraces Islam or submits to Islamic rule.”

While Mitt Romney and Rick Santorum have also declared their strong support for Israel, only Gingrich has embraced a vision of civilizational conflict between the west and Islam – a convenient narrative for the right in Israel, which fears growing international support for the human rights of Palestinians, and would prefer Americans to think of Israel as a bastion of western values threatened by Islamic barbarism.

The number of Americans holding this view is declining. One index of this shifting mood was the New York Times columnist Thomas Friedman writing last December that the standing ovation Netanyahu received at Congress was “bought and paid for by the Israel lobby”, implying that money rather than shared values underlies the special relationship.

Yet there remains a reluctance to fully discuss these issues for fear of fueling the old hate libels about Jewish money controlling world events. This is a real concern: antisemitism continues to be central to much far-right ideology in the US and Europe. Equally, though, we should not be discouraged from properly scrutinising the millions of dollars being spent to advance the career of a politician who promotes conspiracy theories about a Muslim takeover of America and is running for the presidential nomination while espousing a Greater Israel agenda.