The UK government tried to disappear Talha Ahsan and Babar Ahmad to the US, but the basic rules of evidence were unexpectedly applied. 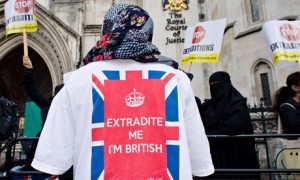 Days after Talha Ahsan and Babar Ahmad were extradited to the US in 2012, the home secretary, Theresa May, began her speech to the Conservative party conference by asking: “Wasn’t it great to say goodbye?” For the government, it must have been a relief to have outsourced the problem, when the pair were flown to the US, 3,500 miles away.

Ahmad and Ahsan – British citizens from Tooting, south London – had become emblems of the injustices and excesses of the war on terror at home. While the US government accused them of “material support” for terrorism, in Britain, they had amassed wide support: 140,000 people signed a petition opposing Ahmad’s extradition. A range of public figures spoke in support of Ahsan, including Scottish writer AL Kennedy and the actor Riz Ahmed.

Ahmad had already embarrassed the government once, winning £60,000 in damages against the Metropolitan police for injuries inflicted on him in his December 2003 arrest. UK prosecutors did not find evidence to bring charges against Ahmad in this first raid. The following year, US prosecutors filed charges to enable his extradition and trial. Soon after Ahmad’s re-arrest on this basis, Ahsan was also arrested and faced extradition.

In the early years of the war on terror, suspects had been rendered to oppressive regimes where they could be subjected to abuses not permissible in Europe or the US. Now, the US was playing the role of the oppressive regime, where British citizens could be disappeared to.

The material support law is the black box of US federal terrorism prosecutions; it bans the knowing provision of “any service, training [or] expert advice or assistance” to a group designated by the federal government as a foreign terrorist organisation or to an organisation engaging in “terrorist activity”. To win a conviction, there is no need to show evidence of a plot or even a desire to help terrorists, just knowing “support”.

This outsourcing plan encountered a serious hiccup in 2007 when the European Court of Human Rights stayed the extraditions of Ahmad and Ahsan – and other co-defendants – to consider whether such transfers might breach the prohibition on torture and inhumane or degrading treatment, or punishment in the European Convention on Human Rights. Many terrorism convicts are held at the ADX prison in Florence, Colorado, where prisoners are placed in solitary confinement for years on end, which the UN special rapporteur on torture, Juan Mendez, thought “would constitute torture”. Under pressure from the UK and US, and relying on statistics supplied by the US, the European court nevertheless allowed the extradition to proceed.

The charges against Ahmad and Ahsan related to a website, Azzam.com. One of the many servers used by the site was hosted in Connecticut from 1999 to 2001, which served as the connection that US prosecutors exploited to initiate the charge and extradition. For Ahmad and Ahsan, it was their first time on US soil. But the loose tie to the US also meant the prosecution could not be held in the usual sites for federal terrorism cases. Instead, the case was scheduled to be heard in New Haven, Connecticut, where terrorism prosecutions were rare.

The US government alleged that Azzam.com was an al-Qaida support operation and that someone who supported the Chechen insurgents and the Taliban must have had the “mindset” that made him an al-Qaida supporter. Sending money to the Taliban was lawful activity in the UK before 9/11 but US prosecutors argued that a British citizen who did so could still be prosecuted in American courts.

As Connecticut had no specialist unit for housing terrorism suspects, the pair were held for two years in solitary confinement alongside death-row inmates in a state facility, the Northern Correctional Institute. At his sentencing, Ahmad described the inhumane conditions there, including the “five pairs of socks and empty shampoo bottle” that he had to carefully affix every night around his cell door and vent to block out the noise of screaming inmates.

Under these conditions, in December 2013, Ahmad and Ahsan each agreed to a plea bargain, which meant Ahmad now faced a maximum sentence of 25 years and Ahsan 15. Last week, a three-day sentencing hearing took place.

As it turned out, the attempt to disappear Ahmad and Ahsan to an obscure court in Connecticut backfired. The case was heard by Connecticut chief judge, Janet C Hall, who was willing to challenge the official narrative in fundamental and unprecedented ways.

The government used video clips, web pages and unpublished documents retrieved from their computers to try to link Ahmad and Ahsan to al-Qaida. When prosecutors noted Azzam.com had republished Osama bin Laden’s 1996 declaration of war against the US, Hall said the New York Times had as well. The court was shown a gruesome video, available on Azzam.com, of a Chechen militant committing war crimes. Hall said that the US government also commits war crimes. A key piece of the government’s case – a document sent unsolicited to Azzam.com containing classified information on the movements of a US navy battle group – was interpreted by the judge as further evidence that Ahsan and Ahmad were not intent on harming the US – they had typed up the information but never used it or passed it on.

She concluded that Ahmad had lost his way in being supportive of the Taliban, even while it was fighting the US and sheltering bin Laden, but there was no evidence of support for al-Qaida. Ahsan had made a similar mistake in supporting the Taliban pre-9/11 but had never engaged in, or endorsed, violent actions. She noted Ahsan and Ahmad’s characteristics of empathy, generosity and wide community of support, and accepted they were motivated not by fanaticism but a desire to end oppression.

Hall sentenced Ahmad to 150 months but deducted the time he had already served and estimated his release in about 13 months. She ordered that the sentence should be served in a British prison. Ahsan was sentenced to time served and is currently in the custody of immigration officers awaiting return to the UK as a free man.

In previous post-9/11 terrorism cases, US judges have displayed an unthinking deference to the government. Last week’s hearing embodied a fairer approach. Hall broke the spell of the official terrorism narrative and showed how easily seeming certainties can slip away once basic rules of evidence and questioning are applied.

This article was originally published on the Guardian website with a different title.