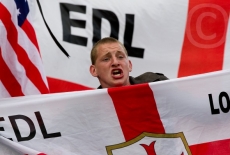 This paper discusses the challenges of countering far-Right political violence in the wake of the terrorist attack carried out by Anders Behring Breivik in Norway in July 2011. With brief case studies of Britain, the Netherlands, Denmark and Belgium, it argues that classic neo-Nazi groups are being supplemented by new ‘counter-jihadist’ far-Right movements, which use various modes of political action, including participation in elections, street-based activism and terrorist violence. Building on recent interest among scholars and practitioners in the role of narratives and performativity in counter-terrorism, this paper argues that official security discourses tend to hinder efforts to counter far-Right violence and can unwittingly provide opportunities for counter-jihadists to advance their own narratives. When leaders and officials of Western European governments narrate issues of multiculturalism and radical Islamism in ways that overlap with counter-jihadist ideology, it suggests a need for reflection on the unintended side-effects of their security discourse. The paper concludes with a discussion of how governments can rework their security narratives to oppose far-Right violence.