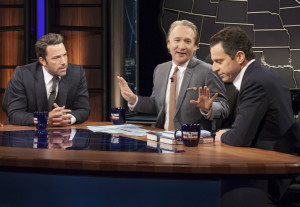 On his “Real Time” show on HBO recently, host Bill Maher told his audience: “Liberals need to stand up for liberal principles” and that “in the Muslim world, this is what’s lacking”. His guest, atheist writer Sam Harris, went on to state that “Islam is the mother-lode of bad ideas” and that “we are misled to think the fundamentalists are the fringe”. Actor Ben Affleck responded by telling Maher and Harris he found their views “gross and racist”, prompting the segment to go viral.

The exchange prompted much discussion on whether Harris and Maher’s comments are factually accurate descriptions of Muslim belief or crude generalisations. Of course, in many Muslim-majority countries, there are ongoing political struggles for gender equality, freedom of expression, freedom of religion and LGBT rights, which any liberal or Leftist ought to support. But such struggles are not unique to Muslim-majority countries. Maher and Harris allege that human rights problems in what they reductively call “the Muslim world” are caused by Islam, as if it is a monolith that mechanically drives people who believe in it to acts of barbarism.

But beliefs reflect social conditions as much as they shape them. Polls of global public opinion suggest that whether one thinks, for example, that violence against civilians is legitimate has more to do with political context than religious belief; and such violence is considered more acceptable in the US and Europe than everywhere else in the world.

Indeed, Sam Harris himself has written in support of killing civilians for the beliefs they hold. In his book The End of Faith, he says: “Some propositions are so dangerous that it may even be ethical to kill people for believing them. … This is what the United States attempted in Afghanistan, and it is what we and other Western powers are bound to attempt, at an even greater cost to ourselves and to innocents abroad, elsewhere in the Muslim world. We will continue to spill blood in what is, at bottom, a war of ideas” (52–3). In this argument, religious belief becomes a proxy for imminent threat in order to justify wars of aggression. A self-proclaimed liberal advocates mass violence against a population defined by its religion, apparently violating the very liberal principles he claims to uphold.

How are we to explain this paradox? Are Maher and Harris bad liberals who fail to apply liberalism consistently? A better explanation is that they express contradictions at the heart of liberalism itself and stand squarely within a long tradition of advocating mass violence against racialised groups in the name of defending liberal values – a tradition that stretches from Napoleon to Tony Blair. Liberalism has long had a problem of only seeing the violence of racial others, while its own violence is hidden from view.

In the abstract, there’s no reason why liberal principles of individual freedom cannot be applied consistently. And principled liberals have been essential to many struggles against racism and imperialism. But, liberalism is not just a body of ideas; it is also a social force. And, as such, there are structural reasons why liberalism keeps undermining its own ideals.

In his Democracy in America, Alexis de Toqueville noted that the citizens of the liberal United States, “each of them, living apart, is as a stranger to the fate of all the rest.” (358) The very individualism that has made liberalism a powerful force for freedom in some contexts also demands precisely this “living apart”. Beyond a minimal shared commitment to the law, the bonds that connect people together in a liberal society are assumed to be a private matter emerging spontaneously through free association, not embedded in any deeper political connection. The liberal concept of tolerance emerges here: you’re free to pursue your own cultural difference so long as it doesn’t really make a difference by becoming political.

But liberal individualism is also the ideology of a social system—capitalism—that sustains itself through marginalising racial groups, through class exploitation, and through the drive to imperial expansion; thus the cultures of racialised groups and exploited classes inevitably become politically insurgent. The liberal demand to depoliticise culture, to abandon “dangerous ideas”, is then highly political and leads liberals to consider all manner of coercive initiatives to engineer the liberal subjects they feel are missing among oppressed groups. Liberalism then becomes a peculiarly cultural project that aims at upholding a “way of life”, if necessary through what Harris calls a “war of ideas” – and he does not use the word “war” metaphorically.

What this means is that the liberal principles that lead Maher to call for cannabis to be legalised (tolerate my choice to smoke what I like!) also lead him to Islamophobia (no tolerance for the intolerant!). It is also this same logic that has provided a rationale for colonialism for centuries and today shapes the perception of a “Muslim problem”. It is the same logic that leads liberals to think that the appropriate response to police killings of black people in Ferguson is to say that we need to be more tolerant or better educated into liberal norms.

For liberals, if the system is producing social conflict, the problem is that some group of people is not liberal enough. But the system is the problem. Maher seems to think racism in America is a Republican Party problem or a southern states problem. If only.

Anti-racist politics is not a demand for liberal tolerance. It understands that having one’s culture tolerated is very different from equal participation in shaping the future of society. Martin Luther King never called for tolerance; he called for racial equality and an end to poverty and war because he understood all three were intertwined products of the same system. There’s no such thing as a liberal anti-racist.

This article was originally published by openDemocracy.