Co-authored with Khaled A. Beydoun, Associate Professor of Law at the University of Detroit Mercy. 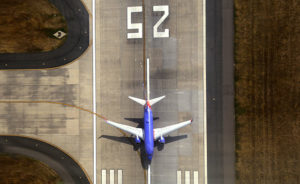 Millions of people have now watched the video of Anila Daulatzai, a pregnant 46-year-old college professor, getting dragged off a Southwest Airlines plane on September 26 at Thurgood Marshall Airport in Baltimore. After it happened, the airline put out a statement alleging that Daulatzai had been legitimately removed because of a life-threatening allergy to dogs and her not possessing a medical certificate stating it was safe for her to travel; a service dog accompanied another passenger on the flight. In this way, Southwest sought to justify the forced removal of Daulatzai, who is from a South Asian background, and blame her for the incident.

Since the incident, Daulatzai has offered her version of what happened. She said that while she does have an allergy to dogs, it is not one that is life threatening. Southwest allows passengers to choose their seats upon boarding and Daulatzai was happy to find a seat away from the dog. However, according to Daulatzai, Southwest representatives did not believe her statements about her allergy and ordered her off the plane. She attempted to negotiate a reasonable solution, but appears to have come up against a perception that, as a woman of color, she was just meant to follow orders without discussion. Maryland Transportation Authority Police (MTAP) officers then boarded the plane, violently removed her from her seat and dragged her through the aircraft. The MTAP officers ignored her repeated protests that she was pregnant.

Daulatzai was arrested and charged with disorderly conduct, failure to obey a reasonable and lawful order, disturbing the peace, obstructing and hindering a police officer and resisting arrest. As the video of the incident went viral, Daulatzai received hate mail, racist messages and death threats. Photographs of her wearing a hijab and working in Afghanistan were widely circulated online to indicate that she is Muslim and to try to support the view that the airline was right to consider her suspect. Islamophobia was thus added to the racial and gender biases of the original incident, as Daulatzai was bombarded with violent hatred.

The treatment of Daulatzai is reminiscent of a broader pattern. Most recently, in April 2017, 69-year-old David Dao, a passenger on a United Airlines flight from Chicago to Louisville, Kentucky, was violently dragged down the aisle of the plane by airport security officers after refusing to give up the seat, which United wanted an airline crewmember to use instead.

One year earlier, 26-year-old University of California, Berkeley, student Khairuldeen Makhzoomi was booted from a Southwest flight and questioned by the FBI after speaking to his uncle on the phone in Arabic while he was waiting for the flight to depart.

That same month, Hakima Abdulle, who is of Somali background and wears a hijab, was forced by airport police to leave a Seattle-bound Southwest Airlines aircraft in Chicago. She was given no explanation for her removal. In response to her experience, Abdulle did not seek financial compensation, but asked Southwest to properly investigate the incident, apologize in person, reimburse her fare and ensure that its employees are properly trained to respect diversity. Had Southwest fully heeded her requests, perhaps Daulatzai’s ordeal could have been avoided.

In another incident a month later, Guido Menzio, a 40-year-old man described as having dark, curly hair, olive skin and a foreign accent, was escorted off an American Airlines flight after a passenger became suspicious of the strange writing in his notebook. The passenger suspected that perhaps he was writing notes in Arabic; in fact, he was an economist writing math equations.

In December 2015 four US citizens of South Asian and Arab backgrounds were told to leave an American Airlines flight from Toronto to New York because the pilot felt “uneasy and uncomfortable” with their presence on the flight. This unease was linked to no evidence that would raise legitimate suspicion, aside from the ethnicities and perceived religions of the four passengers.

In each of these cases, different physical appearances and individual behaviors resulted in the removal of passengers. Yet it is hard to deny that being perceived as Arab, South Asian or Muslim makes one especially vulnerable to being forced off a plane. Moreover, this is not a problem with any one airline, but an issue pervasive across the industry.

There is a deep tension in what it means to be an airline passenger today. On the one hand, passengers are customers of commercial businesses that depend upon their income. On the other hand, passengers are targets of intensified state and private security and can be intimately searched, questioned about their lives and have their movements coercively restricted. Whether the first or the second of these defines one’s experience will likely depend on whether one is perceived as suspect according to the Islamophobic imagination. Flying while Brown or Black is markedly different from flying while white. This will continue to be true so long as airlines have authority to racially and religiously profile in the removal of passengers.

At a moment when racism and Islamophobia are proliferating and trumpeted from within the highest office of the land, this most recent incident is more than a case of one wrongfully removed passenger, but a vivid manifestation of institutional discrimination that can no longer be justified.

This article was originally published by Truthout.