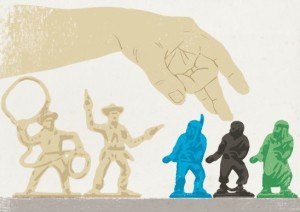 The shooting of three American Muslim students in Chapel Hill, North Carolina, earlier this month has focused attention on anti-Muslim hatred in the US. The murder of Deah Barakat, 23, Yusor Abu-Salha, 21, and Razan Abu-Salha, 19, was initially ignored by mainstream media in the US. Only when large numbers of Twitter users started circulating the story did it attract serious attention. There are strong reasons for thinking the 46-year-old suspect, Craig Stephen Hicks, was motivated by anti-Muslim animosity, and the FBI is investigating the case as a possible hate crime. Even so, initial reports bizarrely stated the murder may have been the result of a dispute over parking.

In 2011, I spent a year traveling around the US investigating Islamophobia – or, more accurately, anti-Muslim racism – for a book I was writing. In a suburb of Houston, Texas, I came across an image that perfectly captured the nature of the problem. In a restaurant hung a poster that had been created by the owner. It consisted of a familiar photograph of a lynching that had taken place in the early twentieth century: a tree, a dead body hanging from a branch, a crowd of white people in the foreground looking jubilant. Where in the original image one would have seen the black face of the victim, in the restaurant’s version the face of a stereotypical Arab had been superimposed. The poster’s caption read: “Let’s play cowboys and Iranians.”

It was a disturbing sight for two reasons. First, because in the same neighborhood, I had heard stories of teenagers beaten up at school simply for being Arab, of harassment of mosque congregations, and of death threats against Muslims aired on local radio stations. Second, because racist imagery here appeared to be a perfectly normal way to decorate the walls of a restaurant. But the image was also, in its own way, revealing. It demonstrated that anti-Muslim sentiment was best understood as part of a longer racial history in the US.

The poster’s caption, with its play on the phrase “cowboys and Indians,” was an implicit celebration of the genocide of America’s Indigenous peoples by European settlers, the first act in the racial history of the US and one that continues to haunt an American culture obsessed with enemies at its frontiers. Likewise, the poster’s use of a photo of a lynching ties its meaning to the history of racial segregation after the abolition of plantation slavery, and the ways that terrorist violence was used to maintain white supremacy.

Anti-Muslim racism then appears as the most recent layer in this longer history, a reworking and recycling of older logics of oppression. From this perspective, Islamophobia, like other forms of racism, should not be seen only as a problem of hate crimes committed by lone extremists. The acts of individual perpetrators can only be made sense of if they are seen as the product of a wider culture, in which glorifying racial violence is acceptable.

All empires require violence to sustain themselves, and the violence perpetrated overseas by imperial powers always flows back, in one form or another, to the “homeland.” In modern times, that violence also always takes on a racial character. The British Empire, for example, relied upon racist ideology to maintain its authority, both domestically and in colonial settings, particularly in the face of resistance to its rule. Blacks and Asians from the colonies who settled in Britain after the Second World War encountered the racism imperialism had fostered there, even after the British Empire itself no longer existed.

Since the end of the Cold War, US foreign policy planners have regarded the Middle East as their most troublesome territory, a region where resistance seems to be especially strongly felt, particularly against the US’s key regional ally, Israel. Following the example of European imperial powers, large sections of the US political and cultural elite have turned to racial ways of explaining resistance to its authority. Rather than see the Palestinian movement, for example, as rooted in a struggle against military occupation and for human rights, it has been more convenient to think that Arabs are inherently fanatical. In other words, the problem is their culture, not our politics.

With the War on Terror, that rhetoric was generalized to Muslims as a whole: their religion seen as somehow especially prone to terrorist violence. The US government’s own violence – torture, drone strikes, and military occupations, which result in many times more deaths than “jihadist” terrorism – can then be more easily defended.

Take, for example, the popular US writer Sam Harris, one of the “new atheists” who seem to have influenced Craig Stephen Hicks. Harris has said that “Islam is the mother-lode of bad ideas” and that “we are misled to think the fundamentalists are the fringe.” He alleges that human rights problems in what he reductively calls “the Muslim world” are caused by Islam, as if it is a monolith that mechanically drives people who believe in it to acts of barbarism.

But beliefs reflect social and political conditions as much as they shape them. Polls of global public opinion suggest that whether one thinks, for example, that violence against civilians is legitimate has more to do with political context than religious belief; and such violence is considered more acceptable in the US and Europe than everywhere else in the world.

Indeed, Sam Harris himself has written in support of killing civilians for the beliefs they hold. In his book The End of Faith, he says: “Some propositions are so dangerous that it may even be ethical to kill people for believing them. … This is what the United States attempted in Afghanistan, and it is what we and other Western powers are bound to attempt, at an even greater cost to ourselves and to innocents abroad, elsewhere in the Muslim world. We will continue to spill blood in what is, at bottom, a war of ideas.” In this argument, religious belief becomes a proxy for imminent threat in order to justify wars of aggression against a population defined by its religion.

Not only does Harris’ argument provide rhetorical support for wars that have led to the deaths of at least half a million people since 9/11. It also gives a rationale for acts of Islamophobic violence at home. It is too early to say exactly what led Craig Hicks to murder three students. But we know that dozens of people have been killed in the US over the last decade by right-wing extremists who have absorbed the racist logic of American imperialism and acted on that basis. Indeed, more people have been killed in the US by right-wing extremists since 9/11 than by the “jihadists” normally regarded as the chief threat of terrorist violence.

The online response to the Chapel Hill shooting demonstrates that there is also another America, the America that in recent months has taken to the streets to protest against police racism with the slogan #BlackLivesMatter (this month, the slogan #MuslimLivesMatter also began to trend on Twitter). For that other America to overcome the US’s long racial history, it will need to understand that Islamophobia is more than the hatred of a small number of individuals, but a system of violence and oppression, inherently connected to imperialism.

A version of this article was published in The National.