Critics say the case raises serious questions about how the government treats radicals of all stripes. 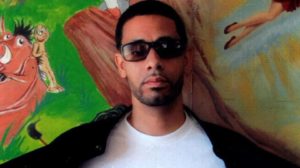 President Donald Trump has pledged to end the “anti-police atmosphere” he associates with the Black Lives Matter movement. And the most powerful man in America enjoys at least some audience for that kind of talk: Last year, more than a hundred thousand people signed a petition to the White House calling for Black Lives Matter to be designated a terrorist organization. With a version of candidate Trump’s promised Muslim ban recently being implemented—at least until federal judges intervened—it’s fair to wonder if the president might be poised to target black activism too, especially given the prominent role played by BLM in some of the early protests against his administration.

If Trump’s team does, in fact, choose to probe radical black activists, the FBI, as America’s top federal domestic law enforcement agency, will almost necessarily be central to those efforts.

Abdul-Alim, a 38-year-old black Muslim man, is currently incarcerated at MCI-Shirley, a state prison in Massachusetts. In 2014, he received a four-to-six-year sentence for illegal gun possession charges, but maintains the allegations were punishment for refusing to become an FBI informant. Now 27 pages of partially redacted FBI surveillance records are bolstering at least part of his story, suggesting the feds first identified Abdul-Alim in 2002 as a potential informant who might spy on mosques associated with black radicals of the 1960s, including Malcolm X.

The documents detail the FBI’s interest in Abdul-Alim’s connections to the Mosque of the Islamic Brotherhood in Harlem, New York, which was co-founded by his late father, Qasim. A 2005 FBI file refers to Qasim as a follower of Malcolm’s and suggests he “may have had some involvement with the Black Panther Party.” The document goes on to state that Ayyub Abdul-Alim “knows many Imams from his father,” and that “the information that he [Ayyub] will be able to provide would give the NYO [New York field office of the FBI] a unique perspective into any criminal activities of present or historical members of the mosque.”

Meanwhile, no specific allegations of criminal activities at the Harlem mosque are made and no grounds for suspicion provided in any of the un-redacted portions of the documents—besides the mosque’s origins in New York’s black radicalism of the 1960s.

According to the documents, FBI surveilled Abdul-Alim for eight years, relying on his alleged ties with radical Muslim organizations and mosques to justify keeping the investigation open. The nature of these ties remains vague, and the groups named as radical—such as the Tablighi Jamaat and Muslims of America—are not designated as terrorist organizations by the US government, although individual members have been involved in acts of violence. On this basis, the FBI describes Abdul-Alim as an associate of unspecified individuals “connected to various IT [international terrorism] cases, to include UBL [Osama bin Laden]/AL-QAEDA.”

Spying on Abdul-Alim was apparently seen as legit by the bureau simply because of his loose associations with people deemed “Islamic extremists,” which seems like a conflation of the radical black Muslim tradition associated with Malcolm X with the rather distinct ideology of al Qaeda. And Abdul-Alim had a previous conviction for narcotics offenses, which agents may have seen as bolstering their hopes of recruiting him as an informant. (The FBI declined to comment on the case for this story.)

“The files suggest that Muslims with family connections to black nationalist groups of the 1960s and 1970s were, after 9/11, viewed as suspicious, as part of the heightened focus on international terrorism and al Qaeda,” explains Michael German, a fellow with the Brennan Center at New York University and a former FBI special agent specializing in terrorism.

The surveillance files were obtained by VICE from a Massachusetts Appeals Court last week, following a Freedom of Information Act request initiated by Abdul-Alim’s lawyer.

An additional 39 pages of surveillance records on Abdul-Alim have also been released to him but have not been made public. According to him, they include detailed accounts of his movements and activities, including meetings with friends, foreign travel, work activities, and visits to local shops. Photographs were taken of the health products store he ran in Springfield, Massachusetts, and people associating with Abdul-Alim were identified and may also have been investigated, he claims. Informants were dispatched to the store and his mosque, with one file noting observations of him at a mosque community outreach event to which local FBI agents had been invited, according to Abdul-Alim.

After eight years of surveillance, the FBI concluded that they had gathered “numerous details about Alim’s daily activity” but found “no specific articulated threat” in connection to Islamic extremism, according to the files reviewed by VICE.

Slightly over a year later, in December 2011, Springfield police officers arrested Abdul-Alim for illegal possession of a firearm. The cops were members of the local Joint Terrorism Task Force and notified the FBI of the arrest. That’s around the time the suspect was offered what one FBI agent allegedly described as “the deal of a lifetime”—to become an informant and thereby avoid up to ten years in prison. Abdul-Alim maintains the gun was planted and that he turned down the offer, putting his faith in an acquittal of the state gun charges at trial. Two years after his arrest, prosecutors introduced a second set of charges relating to a bag of guns police officers say they discovered in an empty suite in his apartment building.

As the trial approached on the first set of gun charges, Abdul-Alim learned that his wife had been recruited as an FBI informant and received cash payments from the government totaling at least $11,949. Nevertheless, the judge in the case, Constance Sweeney, blocked his defense attorney from introducing evidence pointing to the FBI’s involvement. In a phone interview from prison, Abdul-Alim said, “To imprison me because I refuse to reveal some information that they think I may have is alarming.”

Black Muslim organizations have been under surveillance by the FBI since at least the 1940s. Like Malcolm X, Abdul-Alim’s father may have been spied on as a result of his involvement in black radicalism, and is mother was active with the Puerto Rican youth group, the Young Lords, which was also on the FBI radar. In the era of the war on terror, the focus on Black Muslims intensified again, in part because of the much greater resources available to the FBI. In 1975, the FBI had a roster of 1,500 paid informants; by 2008, the number had increased tenfold to 15,000. And in recent years, FBI training materials have instructed agents to be on the lookout for “black separatist” terrorists.

What remains to be seen is how the bureau—whose director since 2013, James Comey, is set to stay on for at least the initial stretch of Trump’s presidency—treats black radicals in this new era.

“Trump’s recent executive order calls for regular reports on rates of Muslim radicalization,” said Alex S. Vitale, an associate professor of sociology at Brooklyn College and an expert on the policing of social movements. “This requires building an investigatory apparatus that will undoubtedly include increased surveillance and infiltration activities. It is a short trip from this to increased surveillance of left political movements such as those for racial justice, the environment, immigrant rights, and labor.”

For his part, Abdul-Alim relates his own experience to the broader context of anti-Muslim suspicion—one that could get worse under the Trump administration. The FBI’s treatment of him, he said, “didn’t only affect me by putting me in prison. They affected a whole community, a whole neighborhood. People are afraid because they’re dealing with the FBI and law enforcement, and we’re still dealing with the prejudices that people have with Muslims.” He adds that many people assume any Muslim under surveillance by law enforcement “must have been involved with terrorist activity.”

Former Massachusetts state representative Ben Swan, who has known Abdul-Alim for more than two years, said he’s always seen him “as someone trying to improve the community.” Adds Swan, “I think he worked with police to clean up the apartment block where he was working.”

Abdul-Alim hopes that the partial release of the FBI documents will help clear his name. “This is a case with every single document that is available to support every single claim that was made,” he said. “All someone has to do is take the time to request it and read it.”

Abdul-Alim will face trial for the second set of gun possession charges in July.

This article was originally published by Vice magazine.