The “war on terror” was supposed to contain violence, but the whole world is a battlefield now. 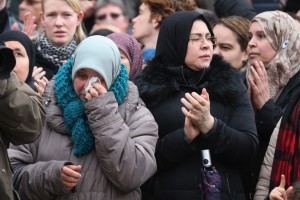 The promise of the “global war on terror” was that “it was better to fight them there than here.” That promise brought mass violence to Iraq, Afghanistan, Pakistan, Palestine, Yemen and Somalia — in the name of peace in the West.

That formula has clearly failed. Tuesday’s bombings in Brussels come on the heels of similar incidents in Grand-Bassam, Ivory Coast; Maiduguri, Nigeria; Istanbul; Beirut; Paris; and Bamako, Mali, all in the last six months. Rather than containing violence, the war on terror turned the whole world into a battlefield.

We should not be surprised. Violence inflicted abroad always comes home in some form. Last year, the U.S. military dropped 22,110 bombs on Iraq and Syria. The Pentagon says these bombs “likely” killed only six civilians, along with “at least” 25,000 Islamic State fighters. The true number of civilian deaths, though, is likely to be in the thousands as well.

Indeed, we know that the war on terror kills more civilians than terrorism does. But we tolerate this because it is “their” civilians being killed in places we imagine to be too far away to matter. There is no social media hashtag to commemorate these deaths; no news channel tells their stories.

Because we pay little attention to the effects of our violence in the places we bomb, it appears that terrorism comes out of the blue. When it does happen, then, the only way we can make sense of it is by laying the blame on Islamic culture.

When opinion polls find that most Muslims think Westerners are selfish, immoral and violent, we have no idea of the real causes. And so we assume such opinions must be an expression of their culture rather than our politics.

Donald Trump and Ted Cruz have exploited these reactions with their appeals to Islamophobia. But most liberals also assume that religious extremism is the root cause of terrorism. President Obama, for example, has spoken of “a violent, radical, fanatical, nihilistic interpretation of Islam by a faction — a tiny faction — within the Muslim community that is our enemy, and that has to be defeated.”

Based on this assumption, think-tanks, intelligence agencies and academic departments linked to the national security apparatus have spent millions of dollars since 9/11 conducting research on radicalization. They hoped to find a correlation between having extremist religious ideas, however defined, and involvement in terrorism.

In fact, no such correlation exists, as empirical evidence demonstrates — witness the European Islamic State volunteers who arrive in Syria with copies of “Islam for Dummies” or the alleged leader of the November 2015 Paris attacks, Abdelhamid Abaaoud, who was reported to have drunk whisky and smoked cannabis. But this has not stopped national security agencies, such as the FBI, from using radicalization models that assume devout religious beliefs are an indicator of potential terrorism.

The process of radicalization is easily understood if we imagine how we would respond to a foreign government dropping 22,000 bombs on us. Large numbers of patriots would be volunteering to fight the perpetrators. And nationalist and religious ideologies would compete with each other to lead that movement and give its adherents a sense of purpose.

Similarly, the Islamic State does not primarily recruit through theological arguments but through a militarized identity politics. It says there is a global war between the West and Islam, a heroic struggle, with truth and justice on one side and lies, depravity and corruption on the other. It shows images of innocents victimized and battles gloriously waged. In other words, it recruits in the same way that any other armed group recruits, including the U.S. military.

That means that when we also deploy our own militarized identity politics to narrate our response to terrorism, we inadvertently reinforce the Islamic State’s message to its potential recruits. When British Prime Minister David Cameron talks about a “generational struggle” between Western values and Islamic extremism, he is assisting the militants’ own propaganda. When French President François Hollande talks of “a war which will be pitiless,” he is doing the same.

What is distinctive about the Islamic State’s message is that it also offers a utopian and apocalyptic vision of an alternative society in the making. The reality of that alternative is, of course, oppression of women, enslavement of minorities and hatred of freedom.

But the message works, to some extent, because it claims to be an answer to real problems of poverty, authoritarian regimes and Western aggression. Significantly, it thrives in environments where other radical alternatives to a discredited status quo have been suppressed by government repression. What’s corrupting the Islamic State’s volunteers is not ideology but the end of ideology: they have grown up in an era with no alternatives to capitalist globalization. The organization has gained support, in part, because the Arab revolutions of 2011 were defeated, in many cases by regimes allied with and funded by the U.S.

After 14 years of the “war on terror,” we are no closer to achieving peace. The fault does not lie with any one administration but with the assumption that war can defeat terrorism. The lesson of the Islamic State is that war createsterrorism.

After all, the organization was born in the chaos and carnage that followed the 2003 invasion of Iraq. Russia and Iran have also played their role, propping up Syrian President Bashar al-Assad’s regime — responsible for far more civilian deaths than the Islamic State — and prolonging the war in Syria that enables the militant group to thrive.

Meanwhile, the alliances that we consider crucial to the war on terror have worked in the Islamic State’s favor. The group’s sectarianism and funding have come from the Saudi and Gulf ruling elites, the West’s closest regional allies after Israel. And the groups that have been most effective in fighting the Islamic State — the Kurdish militia — are designated as terrorists by Western governments because they are considered threats to our ally Turkey.

The incoherence of our response to the Islamic State stems from our Islamophobia. Because we believe religious extremism is the underlying problem, we prop up Arab dictatorships that we think can help us contain this danger. Paradoxically, we support the very regimes that have enabled the Islamic State’s rise, such as the Saudis, the most reactionary influence in the region.

With our airstrikes, we continue the cycle of violence and reinforce the militants’ narrative of a war by the West against Islam. Then, to top it all off, we turn away the refugees, whom we should be empowering to help transform the region. If we want to avoid another 14 years of failure, we need to try something else — and first, we need to radically rethink what we’ve been doing.