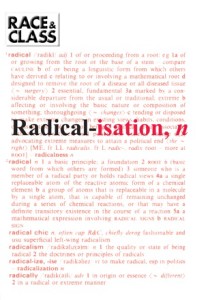 Since 2004, the term ‘radicalisation’ has become central to terrorism studies and counter-terrorism policy-making. As US and European governments have focused on stemming ‘home-grown’ Islamist political violence, the concept of radicalisation has become the master signifier of the late ‘war on terror’ and provided a new lens through which to view Muslim minorities. The introduction of policies designed to ‘counter-radicalise’ has been accompanied by the emergence of a government-funded industry of advisers, analysts, scholars, entrepreneurs and self-appointed community representatives who claim that their knowledge of a theological or psychological radicalisation process enables them to propose interventions in Muslim communities to prevent extremism. An examination of the concept of radicalisation used by the industry’s scholars shows its limitations and biases. The concept of radicalisation has led to the construction of Muslim populations as ‘suspect communities’, civil rights abuses and a damaging failure to understand the nature of the political conflicts governments are involved in.

This article is available to subscribers on the Race & Class website.

7 thoughts on “Radicalisation: the journey of a concept”